The Montana Lab is collaborating with researchers at University of North Texas in a funded project by the Office of Comptroller Texas titled: Population assessment of Smalleye (Notropis buccula) and Sharpnose (Notropis oxyrhynchus) shiners in the Brazos River and data-driven recommendations for a long-term monitoring. 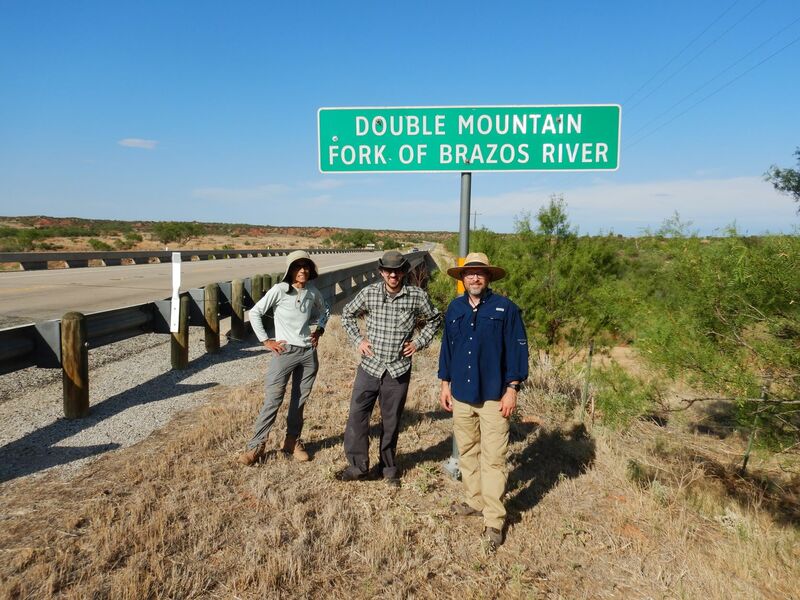 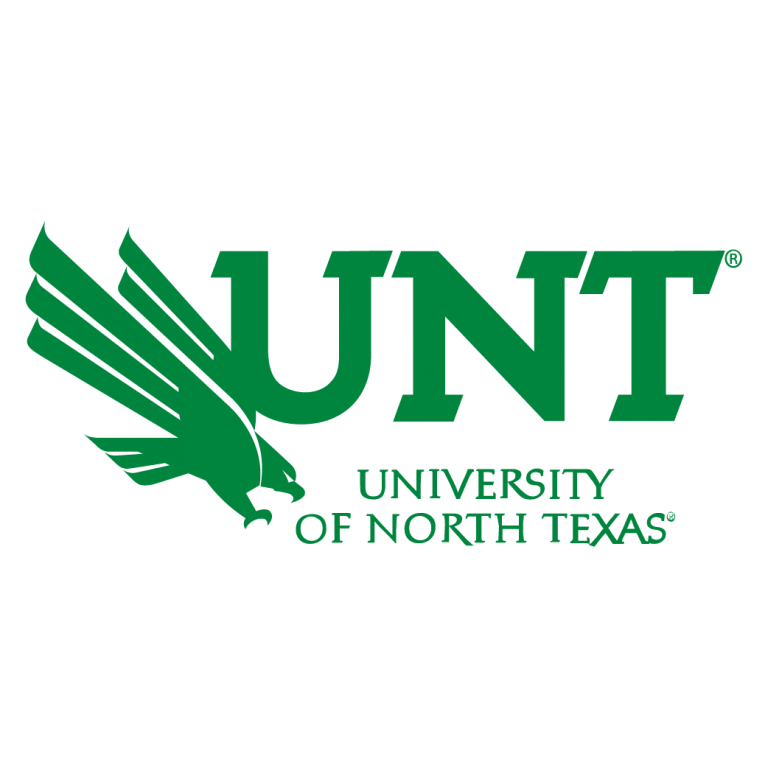 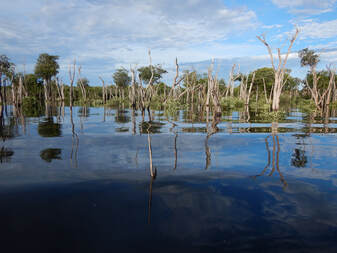 Floodplain forest in Rio Negro-Amazon River. Brazil. Spring 2019.
River/Stream Ecosystems:
​Fish assemblages in freshwater systems are influenced by a large number of ecological factors that operate over multiple ecological scales.
The Montana lab at SFASU uses fish species as model organisms to:
​1)  test theories of local assembly from regional species pools and theories of species packing within habitat patches.
2) investigate the relative importance assembly processes such as environmental filtering versus limiting similarity in structuring species assemblages at different spatial (Continental, Regional, locally) and temporal (seasons).
3) investigate changes in population dynamics over time.
4) gather data that contribute to the baseline fish assessments and fill gaps to better understand the range of distribution of species, areas of occupancy, and their relative abundance in river watersheds.

Currently, The Montana Lab is researching in freshwater ecosystems in temperate and tropical regions. In Texas, Dr. Montaña Lab is working on severla projects involving the conservation status of imperiled fish species in streams and rivers of the Pinewood (East Texas) and Rolling Plains (North Texas) ecoregions. Her international research is conducted in Guyana, South America, where she is researching the impacts of mercury contamination in freshwater ecosystems and fish biodiversity. Her research program seeks to test and advance ecological concepts, that will help to maintain direct applications for solving problem in conservation biology and sustainable use of natural resources. 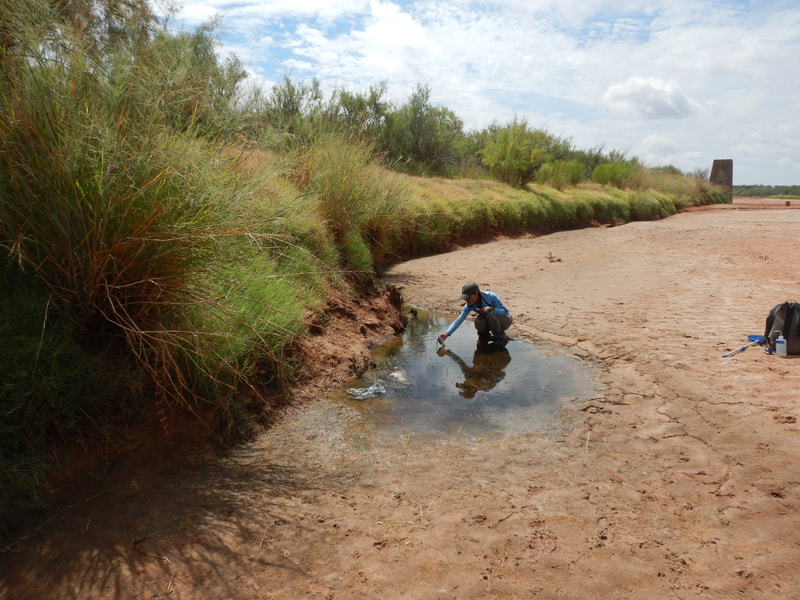 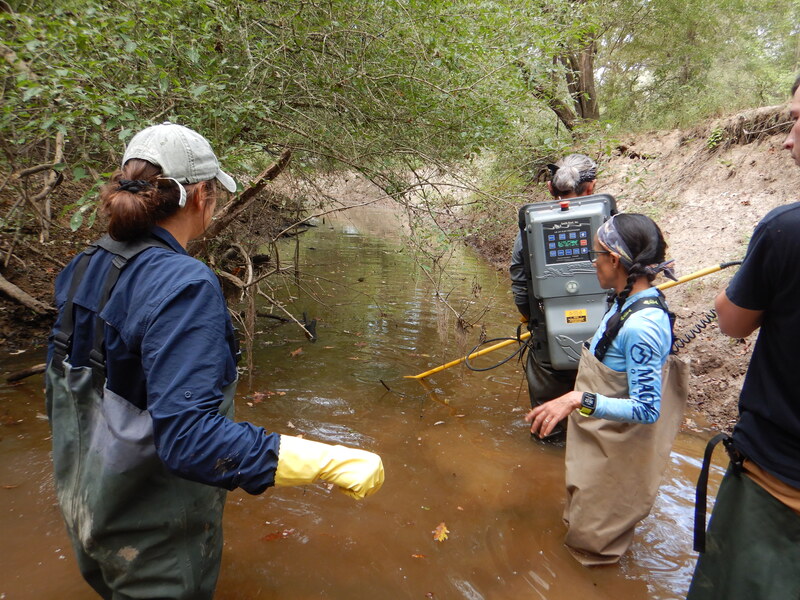 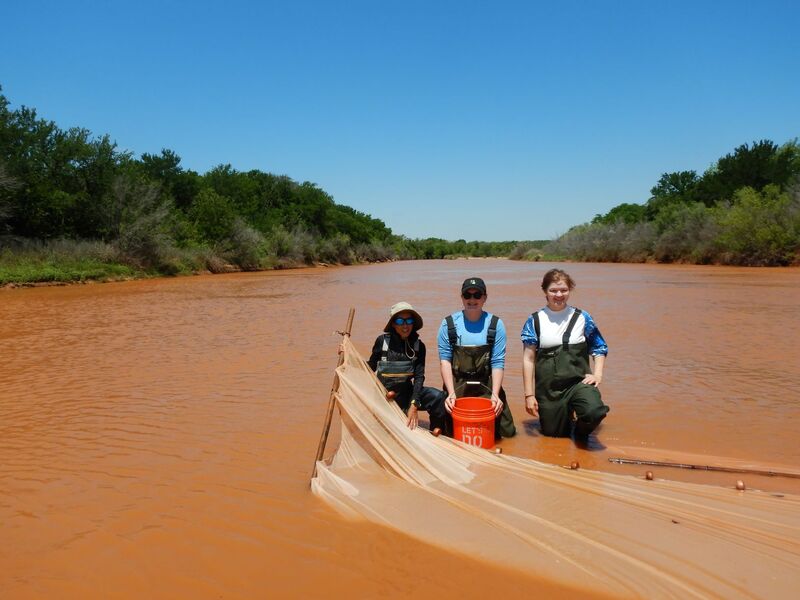 Pond Ecosystems:
​Ponds are biodiversity “hotspots” within the landscape that have the capacity to support a greater biodiversity of aquatic macroinvertebrates, amphibians, fishes and macrophytes, as well as higher proportions of rare and endemic species. Currently, the Montaña Lab is surveying  several ponds along environmental gradients (hydrology, season, and microhabitat types) to disentangle the environment factors driving aquatic diversity across local and landscape scales. The Montaña Lab  is particularly interest in  1) quantifying both environmental factors and species diversity (alpha, beta, and gamma diversity), 2) using a functional trait approach to compare the diversity across ponds. Examining organism’s traits in addition to taxonomic characteristics of the communities will yield a more complete understanding of hydrology-ecology relationships as traits are the means by which organisms interact with and adapt to their environment. 3) evaluating pond food webs and the importance of amphibian larvae for nutrients transport from ponds to forest ecosystems. 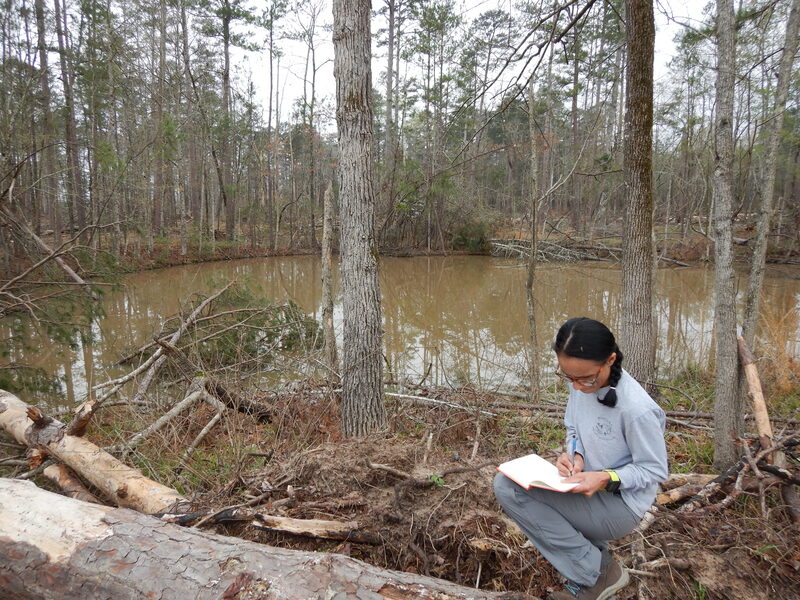 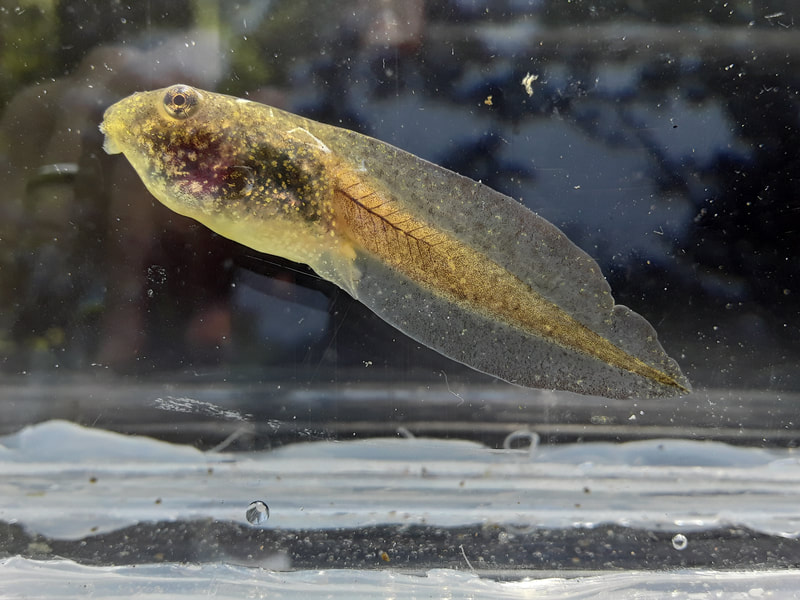 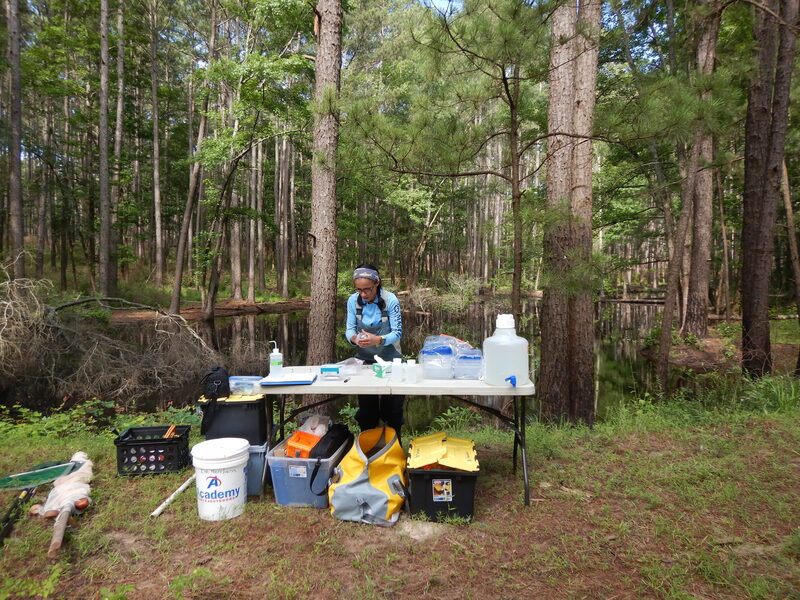 Food web dynamics along the longitudinal gradient of the Usumacinta River (Mexico): a floodplain river in Mesoamerica region
In collaboration with Rocio Rodiles (ECOSUR) and Miriam Soria-Barreto (ECOSUR), and Kirk Winemiller (TAMU), we are investigating the spatial variation in aquatic food web structure in the Rio Usumacinta during a hydrological cycle.  The The Usumacinta River, one of the largest rivers in Mesoamerica, hosts a high diversity of fishes including a large number of endemic species. We are analyzing stable isotope ratios of Carbon (13δC) and Nitrogen (15δN) to estimate 1) the importance of basal production sources supporting fish biomass and other faunal components,2) vertical  structure of trophic position of consumer taxa, and 3) principal trophic pathways in aquatic food webs. These aspects of food web structure are being compared among locations along the longitudinal fluvial gradient and in relation to lateral gradients (floodplains and channel).  This project is funded by El Colegio de La Frontera Sur (ECOSUR), Chiapas, Mexico. 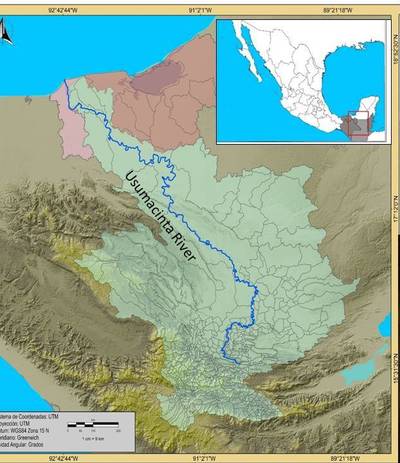 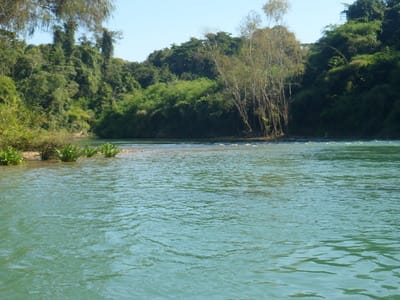 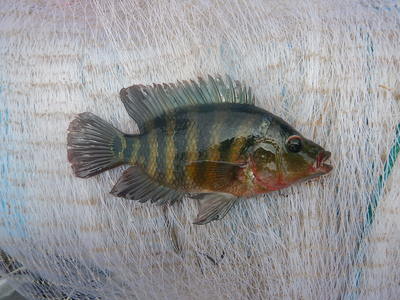 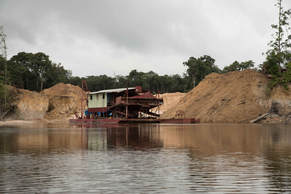 In collaboration with Elford Liverpool (University of Guyana) and Donald Taphorn (ROM) we are assessing fish diversity, mercury concentrations and bioaccumulation in freshwater food webs in the Mazaruni River, a poorly surveyed basin in Guyana. The Mazaruni River, within the Guiana Shield in South America, hosts immense freshwater fish diversity with high species endemism. The Mazaruni is of high conservation priority because its fishes represent a clear example of a threatened endemic freshwater fauna and the river is highly threated by increasing anthropogenic activities (e.g., gold mining). We are using stable isotopes analysis (13C and 15N) and mercury analysis (total mercury [THg] and methylmercury [MeHg]) to allow for inferences to be made about factors that influences MeHg bioaccumulation through the aquatic food web. We will measure mercury concentrations and trophic position on fishes, and we will target fish species that are important food resources for Amerindian communities. We will compare results of mercury concentration and stable isotope analysis between mined and non-mined sites at each river reach. Results from this study will help us to better understand habitat requirement needs for fishes in areas that are degraded by mining activities when compared to non-mined sites along the Mazaruni basin. This project is funded by the World Wildlife Fund (WWF). 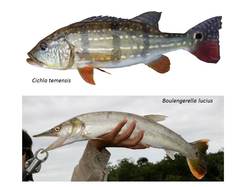 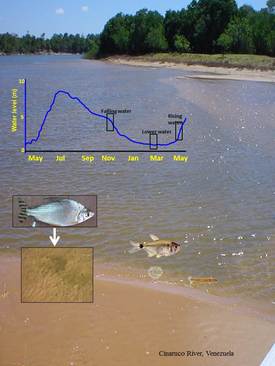 Pulsing hydrology determines top-down control of basal resources by fish and meiofauna in a tropical river-floodplain ecosystem.
Previous experimental studies in the Cinaruco River (Venezuela) have revealed that  benthic feeding fishes can regulate abundance of particulate organic matter on hard substrates. Together with Kirk Winemiller and collaborators (Winemiller et al. 2014), we conducted field experiments that employed large number replicates to estimate effects of fish on organic matter accumulation on sand compared to hard substrates, as well as the extent that migratory and resident fishes have on algae and meiofauna assemblages within the main channel and connected floodplain lagoons during three different phases of the annual hydrologic cycle of a floodplain river in Venezuela.  Our findings suggest that fish controlled the abundance of particulate organic matter and algae on solid substrates, but not on sand, during falling and low water phases within both channel and floodplain habitats. The taxonomic structure of algal and meiofauna assemblages were not significantly influenced by fish exclusion treatments. However, they varied in relation to habitat type and hydrologic phase, and meiofauna densities were highest during the low-water period; experimental exclusion of meiofauna during this period had a significant effect on accumulation of particulate organic matter in sand. 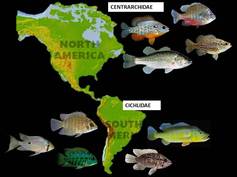